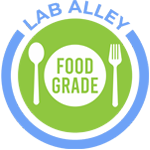 Sodium Acetate, also known as Natrium Aceticum and Sodium Ethanoate, has the chemical formula C2H3NaO2 or CH3COONa. Its anhydrous form appears as colorless-to-white hygroscopic crystals, granules, or powder having free solubility in Water and Alcohol at ambient conditions. It’s an organic salt of Sodium and is an Acetate derivative. On a lab scale, it can be produced by reacting Acetic Acid with an alkali like Caustic Soda or Soda Ash. An FCC Grade chemical is the one that conforms to the criteria of the Food Chemicals Codex (FCC). A substance that has received the FCC Grade certification can be used in food, drug, or medical applications. In the United States of America (USA), Lab Alley is selling its high-quality Sodium Acetate, FCC Grade online at laballey.com.

Please contact us to request a Safety Data Sheet (SDS) and Certificate of Analysis (COA) for Sodium Acetate FCC Grade.