Review the details, description and product details so that you can order the right type of 10% Hydrogen Peroxide for common household uses, scientific and industrial applications. Synonyms and alternate names for 10% Hydrogen Peroxide​ are listed for reference. Lab Alley sells a wide range of brands, grades, percentages, qualities and purities. Chemical safety, hazards and handling information is provided. Read ratings and reviews from customers that have bought 10% Hydrogen Peroxide​ online at LabAlley.com

To save money on bulk orders of 10% Hydrogen Peroxide​ and to discuss wholesale ordering options, call 512-668-9918 to speak with a customer service representative. Contact Lab Alley to learn how 10% Hydrogen Peroxide​ is shipped and delivered in the United States​. U.S. DOT hazmat regulations provide classification criteria that manufacturers and shippers use to classify hazardous material. Where To Buy 10% Hydrogen Peroxide 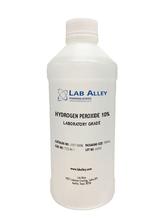 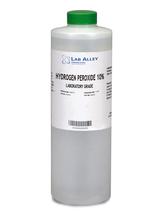 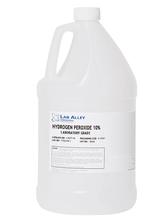 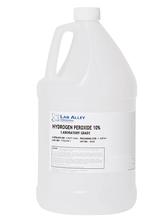 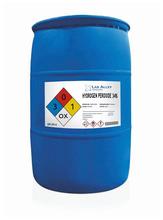 If you have questions about ordering 10% hydrogen peroxide in bulk online here at LabAlley.com or would like to place an order, call 512-668-9918 or email customerservice@laballey.com to talk with a Hydrogen Peroxide Specialist. NOVEMBER 10, 2021 - WHERE TO BUY HYDROGEN PEROXIDE IN RETAIL STORES, PHARMACIES AND ONLINE - Pictured here is a hydrogen peroxide solution in a brown amber bottle in a laboratory. Hydrogen peroxide is a mild antiseptic used on the skin to prevent infection of minor cuts, scrapes, and burns. Hydrogen peroxide is a chemical compound with the formula H2O2. In its pure form, it is a very pale blue liquid, slightly more viscous than water. Hydrogen Peroxide is for sale online at LabAlley.com. Solutions of more than 8%, such as 10%, 27%, 30%, 32%, 34%, 50% and 90% are corrosive to the skin and can cause burns. Solutions containing more than 8% hydrogen peroxide are classified by the U.S. Department of Transportation (DOT) as an oxidizer.  Hydrogen peroxide solutions greater than 10% are not normally used in households in the USA.