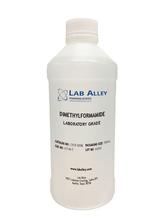 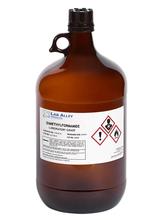 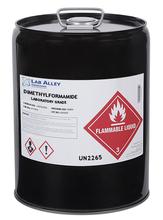 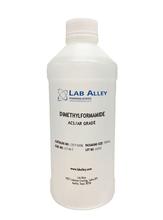 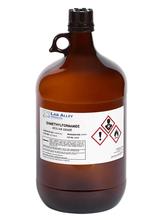 The preparation of Dimethylformamide—strictly, N,N-dimethylformamide from dimethylamine chloride and formic acid was first described by A. Verley in 1893. It is also a common solvent for spectroscopy and a component of paint strippers.

DMF is a colorless, water-soluble liquid with a faint ammonia-like odor. The preferred IUPAC name is N,N-Dimethylformamide. This organic solvent is used in acrylic fiber spinning, chemical manufacturing, and pharmaceutical production; it is also present in textile dyes and pigments, paint stripping solvents, and coating, printing and adhesive formulations.

Dimethylformamide (DMF) is frequently used for chemical reactions and other applications, which require a high solvency power. Scientists have studied and analyzed the impact of different types of solvents, such as dimethylformamide (DMF), methanol, hexane, and ethyl alcohol, for the purpose of antioxidant extraction from various plants parts, such as leaves and seeds. In order to extract different phenolic compounds from plants with a high degree of accuracy, various solvents of differing polarities must be used.

DMF has long been known to be toxic to the liver.  Dimethylformamide is readily absorbed through the skin, inhaled, or ingested. DMF is a potent liver toxin. DMF may cause abdominal pain, constipation, nausea and vomiting, headache, weakness, dizziness, skin problems, and alcohol intolerance. Current evidence associating DMF with cancer in humans is not conclusive. Toxic amounts of dimethylformamide may be absorbed by inhalation and through the skin. To learn how to prevent adverse health effects from exposure to dimethylformamide, click here.  After 2020, solvents like dimethylformamide are likely to be restricted under the EU’s Reach regulations.  Consumer products such as backpacks can expose you to chemicals such as dimethylformamide, which is known to the State of California to cause cancer.

The primary use of DMF is as a solvent with low evaporation rate. DMF is used in the production of acrylic fibers and plastics. It is also used as a solvent in peptide coupling for pharmaceuticals, in the development and production of pesticides, and in the manufacture of adhesives, synthetic leathers, fibers, films, and surface coatings.

It plays multiple roles in various reactions such as solvent, dehydrating agent, reducing agent as well as catalyst. It is a multipurpose building block for the synthesis of compounds containing O, -CO, -NMe2, -CONMe2, -Me, -CHO as functional groups.  N,N-Dimethylformamide is a polar solvent commonly used in organic synthesis. It also acts as a multipurpose precursor for formylation, amination, aminocarbonylation, amidation and cyanation reactions.

N,N-Dimethylformamide (DMF) is an extraordinary organic compound with the formula (CH3)2NC(O)H. It generally abbreviated and literally always called, DMF (should not be mistaken with dimethylfuran or dimethyl fumarate). It is a colourless liquid with a high boiling point which is miscible with water and also with a majority of common organic solvents. For information on dimethylformamide NMR, click here.  DMF is also used as an organic reagent in some reactions.

High purity (99.8%) AR Grade And ACS Reagent Grade dimethylformamide purchased from Lab Alley meets the ACS Reagent Grade specifications published by the American Chemical Society. DCM is used for analytical purpose and research work. having high purity. AR Grade is the standard Mallinckrodt grade of analytical reagents; suitable for laboratory and general use. If the reagent also meets the requirements of the American Chemical Society Committee on Analytical Reagent, it will be denoted as an AR (ACS) reagent.