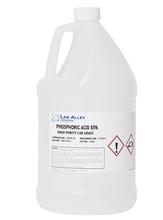 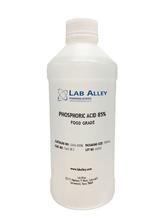 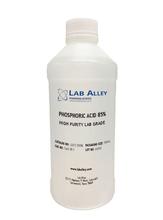 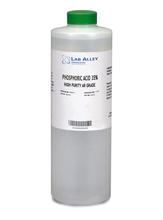 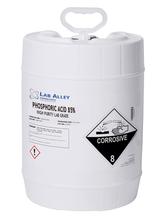 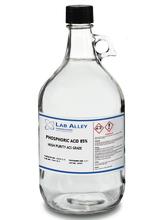 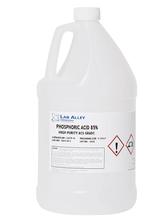 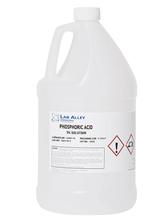 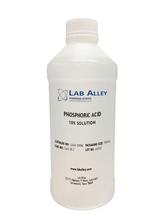 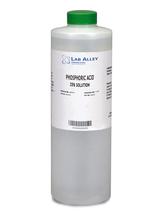 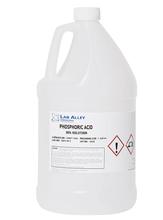 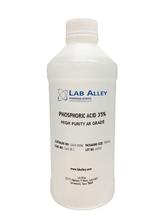 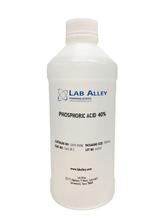 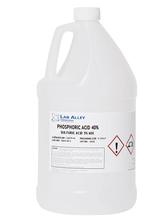 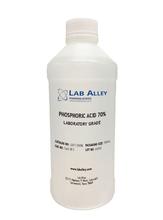 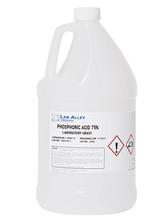 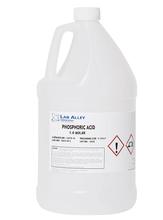 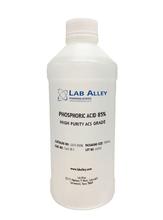 If you have questions about ordering phosphoric acid online here at LabAlley.com or would like to place an order, call 512-668-9918 or email customerservice@laballey.com to talk with a phosphoric acid specialist.

Phosphoric acid, also known as orthophosphoric acid or phosphoric(V) acid, is a colorless, odorless crystalline liquid or transparent crystalline solid. The pure solid melts at 42.35°C and has a density of 1.834 g / cm3. Phosphoric Acid is a clear, colorless to light yellow, syrupy liquid and is odorless. It is soluble in water and ethanol.

Information On Phosphoric Acid From Wikipedia

Phosphoric acid, also known as orthophosphoric acid or phosphoric(V) acid, is a weak acid with the chemical formula H3PO4. It is normally encountered as a colorless syrup of 85% concentration in water. The pure compound is a colorless solid. All three hydrogens are acidic to varying degrees and can be lost from the molecule as H+ ions (protons). When all three H+ ions are removed, the result is an orthophosphate ion PO43−, commonly called "phosphate". Phosphoric acid is commonly encountered in chemical laboratories as an 85% aqueous solution, which is a colourless, odourless, and non-volatile syrupy liquid. Although phosphoric acid does not meet the strict definition of a strong acid, the 85% solution can still severely irritate the skin and damage the eyes. The name "orthophosphoric acid" can be used to distinguish this specific acid from other "phosphoric acids", such as pyrophosphoric acid. Nevertheless, the term "phosphoric acid" often means this specific compound; and that is the current IUPAC nomenclature.

Specific applications of phosphoric acid include:

Phosphoric acid has been used for centuries, unknown to those people using it until 1669 when an alchemist named Hennig Brand discovered phosphorus. He found a recipe in a book that claimed alum, saltpeter, and concentrated urine could turn base metals into silver. This didn’t work as we all know, but he heated residues from boiled-down urine until it was red hot and glowing fumes filled it and liquid dripped out and burst into flames. He got the liquid and covered it where it then solidified and gave off a pale green glow. He named it from the Greek language it was known to them as “light-bearing”, what he collected was phosphorus.

A pure phosphoric acid is found in crystal that is extracted from rocks. By burning the phosphorus element and adding water to the byproduct we obtain phosphoric acid. It is an example of a corrosive acid, when it is in contact with organic compounds it can form toxic gas.

Orthophosphoric acid is a non-toxic acid, when it is pure at room temperature it is a solid. Phosphates are essential for life, being the building blocks for both DNA and RNA. Commonly phosphoric acid is an 85% aqueous solution. Such solutions are colorless, odorless, and non-volatile. This solution is a syrupy liquid.

Phosphoric Acid Uses and Applications in The United States

Phosphoric acid is an important industrial chemical, it is used as an intermediate in the fertilizer industry, as an additive in the food industry, and for metal surface treatment in the metallurgical industry.

Phosphoric acid is commonly used as a food additive (additive E338). It is used to acidify foods and drinks and it provides as tangy or sour taste.

It is used in anti-rust treatment by phosphate conversion coating. Phosphoric acid is economical because it can be found in households. It has the ability to remove rust because it can turn rust into ferric phosphate which is basically a black coating. It also dissolves the rust quickly and leaves a coating of iron phosphate which prevents further rust corrosion. It will make the surface with a hard and bright metal finish. Phosphoric acid is also used as an external standard for phosphorus-31 nuclear magnetic resonance.

Phosphoric acid is used in fuel cells, they are the first generation of commercial modern fuel cells operation at temperatures between 170°C and 210°C. They were developed for terrestrial applications. Phosphoric acid can tolerate CO2 in fuel gas streams and in air. It is considered well suited for distributed generation because electricity can be generated near with it is being used. This is significant because it will reduce the amount of energy lost in transmitting electricity. It will also reduce the construction of power grid infrastructure. Lastly, phosphoric acid fuel cells generate high temperature waste heat that can be used for heating water, space heating, and low-pressure steam in a cogeneration system.

Phosphoric acid is used in dentistry and orthodontics as an etching solution, to clean and roughen the surfaces of teeth where dental applications or fillings will be placed. It is a constituent in bone and teeth, and plays a role in many metabolic processes

Phosphoric acid is used as a food additive because it regulates the acidity in foods like jam, cereal and processed meats. In beverages it acts as an acidulant, phosphoric acid helps to slow down the growths of molds and bacteria in sugar formula. It also adds to the taste, giving the drink a sharper and tangy taste. Phosphoric acid has its appeal in the food industry due to its cheap prices. Food-grade phosphoric acid is often referred to as additive E338.

In dairy products the salts of phosphoric acid are used to alter the protein and the pH level of the product to improve quality. It is also used as a sanitizing agent in the dairy, food, and brewing industries.

All plants require the correct balance of minerals and nutrients in order to thrive. Phosphate is one of those and it is included in all fertilizers. This is accomplished in the form of phosphoric acid. Phosphoric acid cannot be taken up directly by plants, it needs to be altered. After it is applied to the soil, the acid is converted into hydrogen phosphate by chemical actions and biological agents. The primary source of phosphorus in commercial fertilizers is phosphoric rock. Acid is then applied to the rock once it is mined and crushed. Then the phosphoric acid can be applied in many different ways.

Phosphoric acid is used as an intermediate in pharmaceuticals like in anti-nausea medicines. It is also used in dentistry because it can be used as an etching solution and it is used to clean teeth.

Inorganic phosphoric acid is classified as Generally Regarded as Safe (GRAS) as a food additive by the FDA.

Storage for phosphoric acid needs to be in a cool, well-ventilated area protected from moisture. Keep away from incompatible substances like an oxidizing agent or combustible materials. Store it in a metallic or coated fiberboard container using a strong polyethylene inner package. Dispose of this chemical in accordance with federal, state, and local government environment control regulations.

Information About Phosphoric Acid From PubChem

Phosphoric Acid is a colorless, odorless phosphorus-containing inorganic acid. Phosphoric acid is a sequestering agent which binds many divalent cations, including Fe++, Cu++, Ca++, and Mg++. Phosphoric acid is used in dentistry and orthodontics as an etching solution, to clean and roughen the surfaces of teeth where dental appliances or fillings will be placed. In addition, phosphoric acid is a constituent in bone and teeth, and plays a role in many metabolic processes.

Phosphoric acid appears as a clear colorless liquid or transparent crystalline solid. The pure solid melts at 42.35°C and has a density of 1.834 g / cm3. Liquid is usually an 85% aqueous solution. Shipped as both a solid and liquid. Corrosive to metals and tissue. Used in making fertilizers and detergents and in food processing.

Phosphate is a salt of phosphoric acid. In organic chemistry, a phosphate, or organophosphate, is an ester of phosphoric acid. Organic phosphates are important in biochemistry, biogeochemistry and ecology. Phosphate (Pi) is an essential component of life. In biological systems, phosphorus is found as a free phosphate ion in solution and is called inorganic phosphate, to distinguish it from phosphates bound in various phosphate esters. Inorganic phosphate is generally denoted Pi and at physiological (neutral) pH primarily consists of a mixture of HPO2-4 and H2PO-4 ions. phosphates are most commonly found in the form of adenosine phosphates, (AMP, ADP and ATP) and in DNA and RNA and can be released by the hydrolysis of ATP or ADP. Similar reactions exist for the other nucleoside diphosphates and triphosphates. Phosphoanhydride bonds in ADP and ATP, or other nucleoside diphosphates and triphosphates, contain high amounts of energy which give them their vital role in all living organisms. Phosphate must be actively transported into cells against its electrochemical gradient. In vertebrates, two unrelated families of Na+-dependent Pi transporters carry out this task. Remarkably, the two families transport different Pi species: whereas type II Na+/Pi cotransporters (SCL34) prefer divalent HPO4(2), type III Na+/Pi cotransporters (SLC20) transport monovalent H2PO4. The SCL34 family comprises both electrogenic and electroneutral members that are expressed in various epithelia and other polarized cells. Through regulated activity in apical membranes of the gut and kidney, they maintain body Pi homeostasis, and in salivary and mammary glands, liver, and testes they play a role in modulating the Pi content of luminal fluids. Phosphate levels in the blood play an important role in hormone signaling and in bone homeostasis. In classical endocrine regulation, low serum phosphate induces the renal production of the seco-steroid hormone 1, 25-dihydroxyvitamin D3 (1, 25(OH)2D3). This active metabolite of vitamin D acts to restore circulating mineral (i. e. phosphate and calcium) levels by increasing absorption in the intestine, reabsorption in the kidney, and mobilization of calcium and phosphate from bone. Thus, chronic renal failure is associated with hyperparathyroidism, which in turn contributes to osteomalacia (softening of the bones). Another complication of chronic renal failure is hyperphosphatemia (low levels of phosphate in the blood). Hyperphosphatemia (excess levels of phosphate in the blood) is a prevalent condition in kidney dialysis patients and is associated with increased risk of mortality. Hypophosphatemia (hungry bone syndrome) has been associated to postoperative electrolyte aberrations and after parathyroidectomy (PMID: 17581921, 11169009, 11039261, 9159312, 17625581). Fibroblast growth factor 23 (FGF-23) has recently been recognized as a key mediator of phosphate homeostasis, its most notable effect being promotion of phosphate excretion. FGF-23 was discovered to be involved in diseases such as autosomal dominant hypophosphatemic rickets, X-linked hypophosphatemia, and tumor-induced osteomalacia in which phosphate wasting was coupled to inappropriately low levels of 1, 25(OH)2D3. FGF-23 is regulated by dietary phosphate in humans. In particular it was found that phosphate restriction decreased FGF-23, and phosphate loading increased FGF-23.

Common Acids Purchased By Laboratories, Manufacturing Companies, Homeowners And Individuals For Personal Use In The United States